A Guide to Biking in Minneapolis and St. Paul, MN

They say you can’t win ‘em all but when it comes to cycling Minneapolis comes close. Thanks to the Twin Cities’ (Minneapolis & St. Paul) supportive infrastructure, bike-minded politicians, and outstanding network of advocacy organizations, the Cities have been blessed with over 200 miles (322 kilometers) of combined on- and off-street bikeways, making it easy to bike just about anywhere. It’s no wonder that despite scorching summers and subzero winters, thousands of locals bike the city for commuting and recreation year-round. 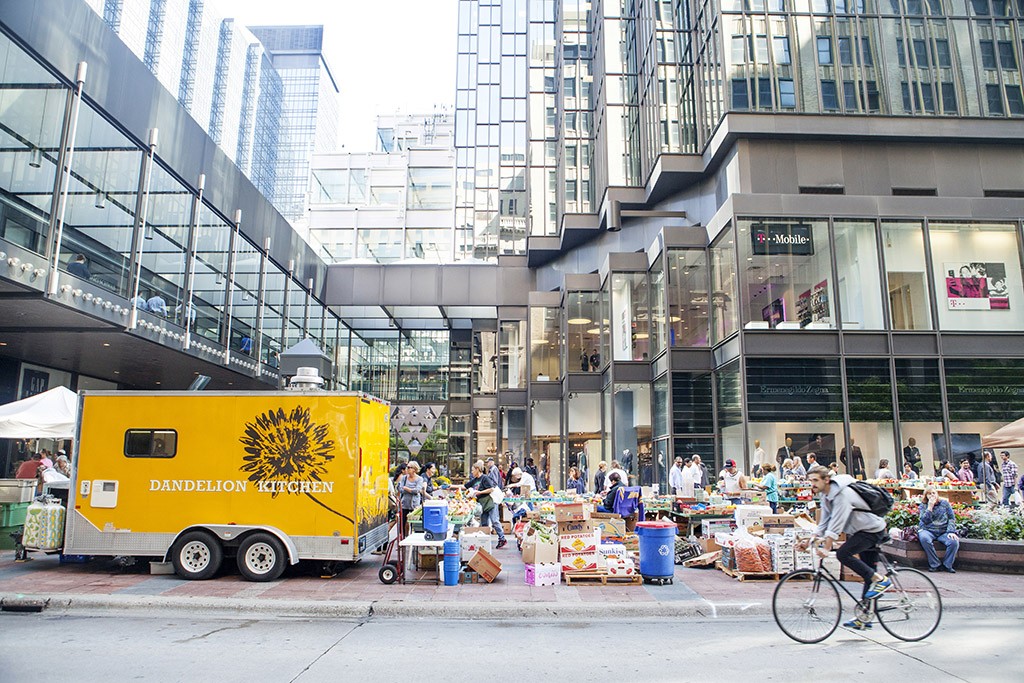 The downtown Farmers Marker is every Thursday on Nicollet Mall April-October. Very crowded during lunch time. Sells fresh produce and flowers. Most vendors sell locally grown and organic produce. Many shops and restaurants run along Nicollet Mall. The mall is only open to bike traffic, buses, taxies and emergency vehicles.
Photo by France Barbeau

Explore the cities on any part of the Grand Rounds National Scenic Byway – especially the chain of lakes or the historic mill ruins and waterfall near the Stone Arch Bridge. Take the trail down to Minnehaha Falls, or a quick stroll through the Walker Art Center’s outdoor sculpture garden to see the iconic Spoonbridge and Cherry.

Head over to First Avenue to check out a concert or cheer for a local sports team at the arena or baseball park. Visit the riverfront’s Mill City Museum for a history lesson on the industry that made Minneapolis or the Guthrie Theatre near Gold Medal Park for a play and a great view.

During the summer months you can join locals biking the Northern Spark all-night arts festival or participate in Pedalopolis – the social bike ride festival. Catch one of the Twin Cities’ Open Streets festivals or explore local fare and crafts at one of the many neighborhood farmers’ markets in spring, summer, or fall.

In the winter, there are plenty of cold-weather activities such as the Winter Bike Expo, the Art Shanty Project, the St. Paul Winter Carnival, and free ice skating in public rinks help keep locals entertained throughout the winter. 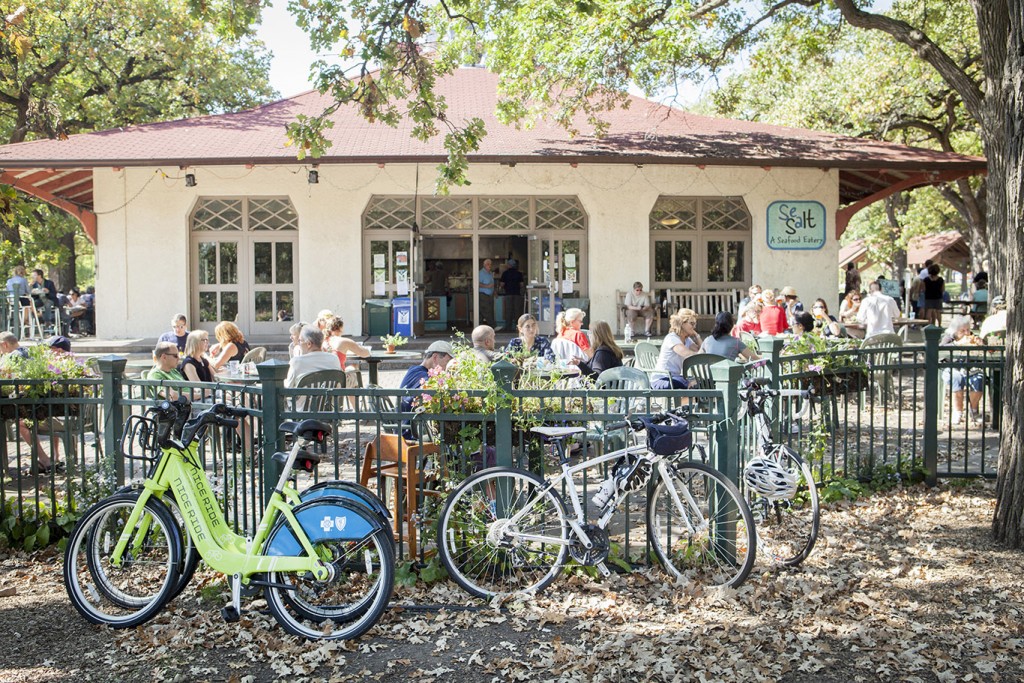 Sea Salt is a seasonal restaurant which serves mostly fish seafood, beer and wine, located right next to the Minnehaha Falls. Its a super busy place when open. Minnehaha Falls is connected to the Mississippi River and there are a lot of trails for exploration.
Photo by France Barbeau

Perk up with a cup of coffee at one of the area’s many hybrid bike/ coffee shops, such as Angry Catfish. Wet your whistle at Dangerous Man or grab a bite at a bike-friendly cafe such as Hard Times or Birchwood. 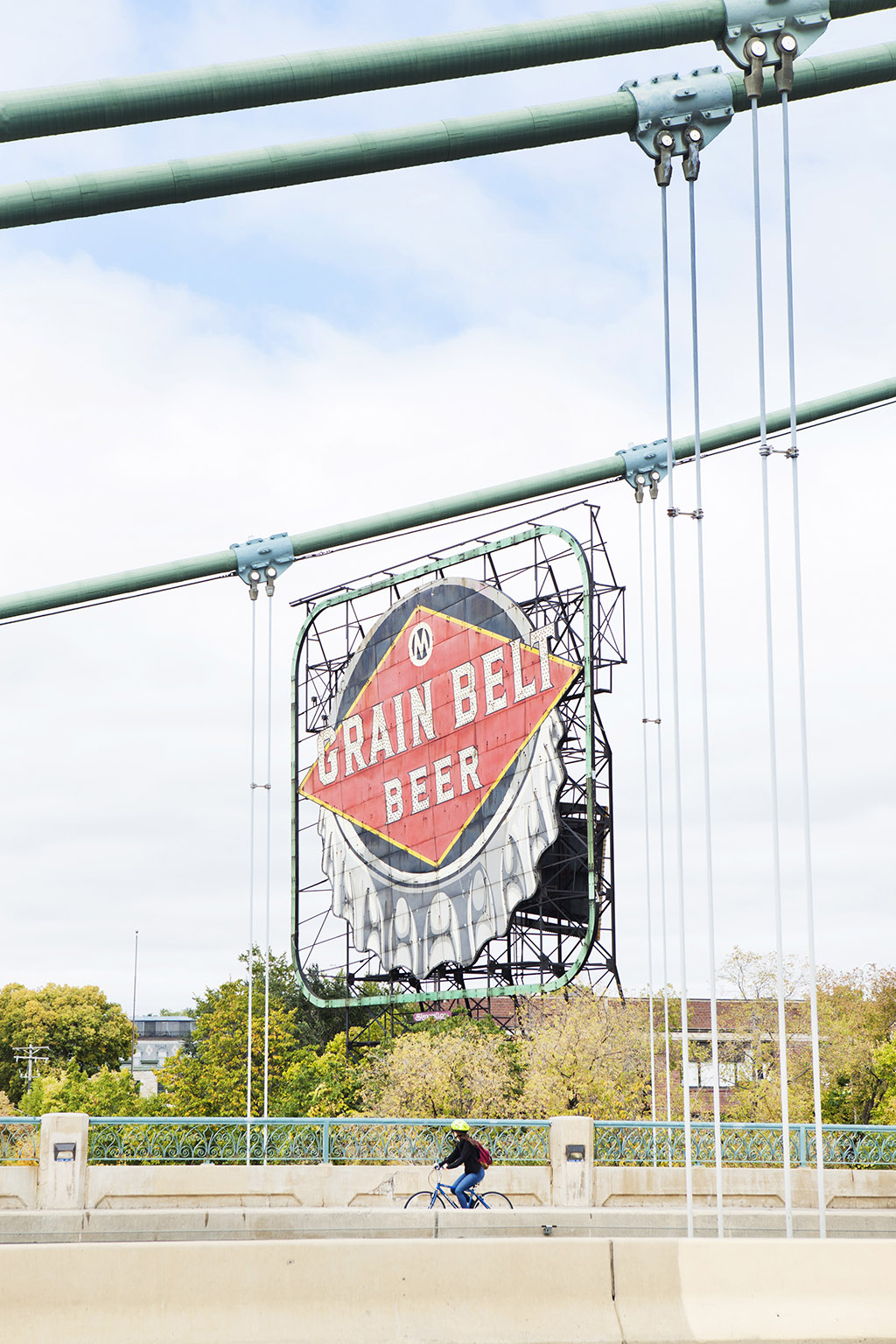 The grainbelt sign is located on the Father Hennepin Bridge located in downtown bordering Northeast Minneapolis, over the Mississippi River. Grainbelt is a local Minneapolis beer company.
Photo by France Barbeau

For short-term use, try out Nice Ride from April through November. Tour the lakes and river with a bike from Wheel Fun Rentals. Longer-term rentals are available at several local bike shops, including Freewheel, Erik’s, and Calhoun Cycles. Locals are also willing to rent out their bikes to you on Spinlister.

The Grand Minneapolis Hotel offers free public bicycle rentals to all guests and is located mere blocks 26 from the city’s bike-friendly riverfront. The centrally located Midtown Sheraton overlooks Minneapolis’ off-street protected bicycle super-highway: the Midtown Greenway. Nice Ride is a seasonally-operated bike share system and stations are located within a few blocks of nearly all hotels in both downtown areas. 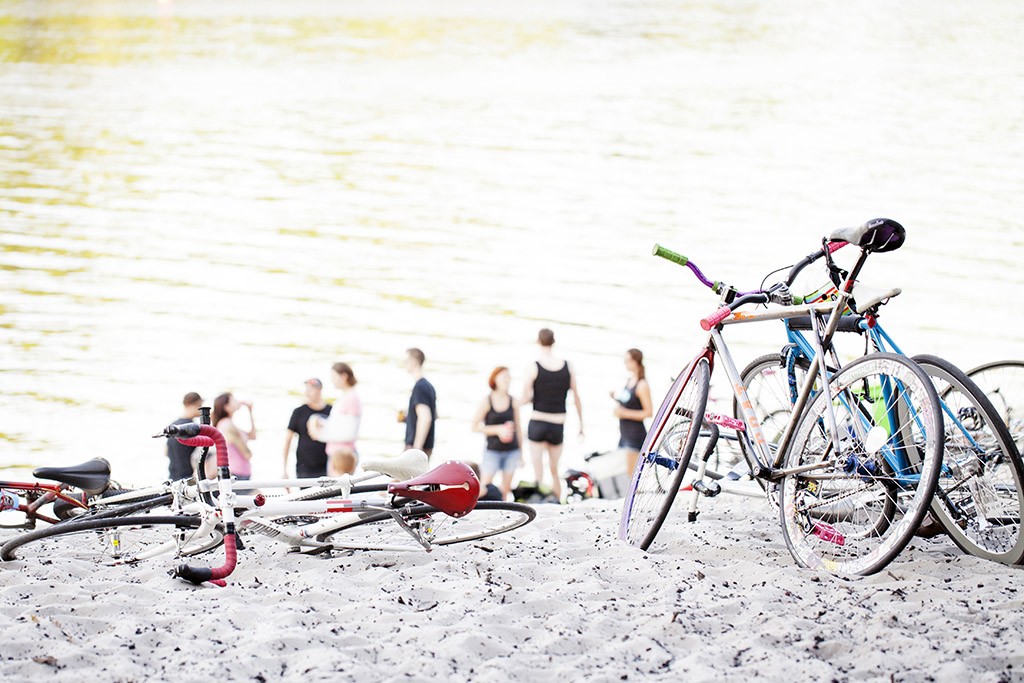 The Grand Rounds Scenic Byway links the chain of lakes, trails and the Mississippi River it is a stretch that runs approximately 50 miles of bike riding. It’s popular to bike around and take little breaks at a nearby beach along the Mississippi or Lakes in Minneapolis.
Photo by France Barbeau

EG is a community funding coordinator by day and a tandem enthusiast, competitive baker, and advocate for queers and animals at all other times. She is a co-founder of Queer Bike Gang and can be found riding around Minneapolis where she lives with a cute boi and three cats. queerbikes.org

A Guide to Biking Chicago, IL

A Guide to Biking in Vancouver, BC

A Guide to Biking in Santa Barbara