The Cargo Node is a game-changing collaboration between Tern and Xtracycle. 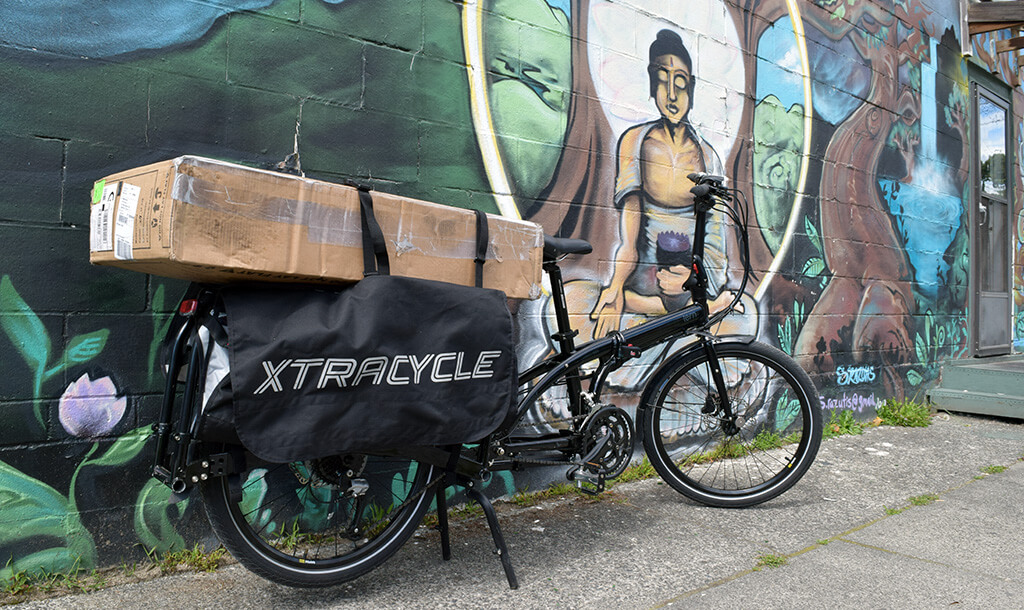 This bike is part of our Bicycle Lending Library

The Cargo Node is a full-size cargo bike which folds down to 1/3 of its size in 10 seconds. It has 160 kg (350 lb) total cargo capacity including the rider, versatile, all-weather CarryAll™ bags with 35 L / 22 kg capacity per side, Xtracycle Kickback™ bipod kickstand, Promax hydraulic disc brakes, 41 lux Valo™ 2 hub-powered front light, adjustable Andros™ handlebar stem, an extra-strong chromoly fork, 24″ wheels with Schwalbe Big Apple tires, and a full-size tire pump hidden inside the seatpost.

If you just want the quick notes, here it is: this thing is amazing. If you want the details, there are many. Tern and Xtracycle, two bike-markers renowned for their passion and quality, were incredibly thoughtful in their design of the Cargo Node and the result is a bike that leaves little wanting.

The Cargo Node has no learning curve whatsoever on riding or balancing it, unloaded it rides just like a normal upright bicycle, and fully loaded it remains smooth and easy to pedal. A 2×8 transmission gives you more than enough options to haul a heavy load up a hill, and gain your speed back with a high gear on the downhill. The 24″ wheels make hauling stacked loads much easier with the low center of gravity, and the bike comes off the shelf with puncture resistant Schwalbe Big Apple tires, a much appreciated detail for riders tackling bumpy city streets with weight on the back. Tern says the bike has a total cargo capacity of 160 kg (350 lbs), including the rider. I weigh around 130 lbs and at one point had 170 lbs on the back. While I won’t say that was a pleasure cruise on a few of Vancouver’s hills, it was doable, and I had full confidence in the strength and stability of the frame and rack. Even with so much weight on the back, the bike remained balanced and the stopping power of the Promax hydraulic disc brakes managed to prevent me from going flying through an intersection. 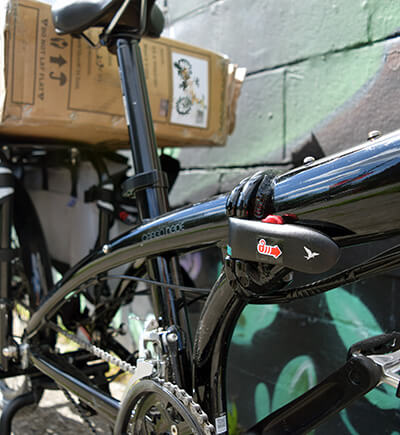 For the foldability, the bike is very obviously made by an industry leader. It folds very easily – as advertised, in under 10 seconds. When folded down it fits in an elevator, in the corner of your living room, basically anywhere you can fit a normal bicycle. It’s also light enough to lift, so while I wouldn’t say you can carry it up 3 flights of stairs every day, you can definitely carry it up a few steps on the way into the office. At one point I even hung it up on a bike hook in an over-crowded bike room. This is a total game changer for urban commuters who want the benefits of a cargo bike without the hassle of trying to figure out how to store it.

The adjustable handlebars are another huge selling point for the Cargo Node. The Andros stem, Tern’s patented system, enables you to set your handlebars forward or back in a matter of seconds with no tools, essentially allowing you to toggle back and forth between a more aggressive riding position or an upright cruise. Together with the huge adjustment range of the seatpost, this means you can also adjust the whole bike to fit a wide variety of rider sizes. We had friends in a range of 5’1″ to 6′ jump on the bike, and each was able to adjust it enough to find a position that was comfortable for them just by pulling a few levers.

Coming stock with Xtracycle’s CarryAll bags, you’d be hard pressed to find anything you can’t hold or securely strap down to the rack. The bags have a sizeable cargo bay, making it easy to casually toss items in as you run errands. The all-weather lid inspires confidence riding around with any sort of cargo in any sort of weather, and has the added bonus of hiding your stuff as you nip in and out of stores. If you’re hauling more than can fit in the cargo bay (say, a snowboard), the exterior sling and four straps means you can just fasten to the side of the rack. The straps on one side buckle into the straps on the other side, enabling you to also easily fasten larger items to the top of the rack. If anything, I found the four rather long straps to be overkill as I mostly used the bike for regular daily errands, they just got in the way. But a friend who borrowed the bike to carry two other adult bicycles to the shop said they were just what she needed.

Finally, the bike comes with all the bells and whistles. Fenders, a double kickstand, a hub-dynamo powered front light, even the seatpost doubles as a floor pump. This bike was incredibly thoughtfully designed and it shows in the details. 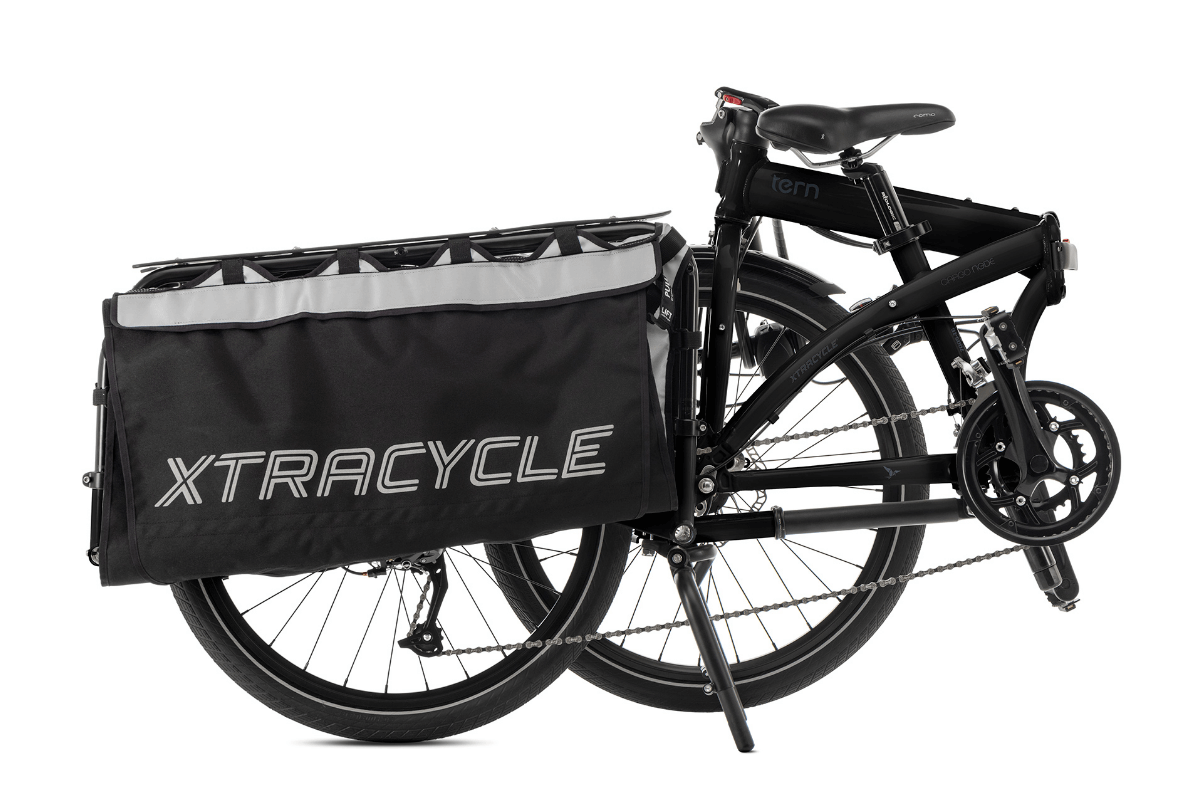 There are no established industry tests to confirm it’s safe to carry kids on the Cargo Node. While this is not the fault of Tern or Xtracycle (and the bike is compatible with all Xtracycle family accessories including child seats), it does mean the bike isn’t officially suitable for transporting children, which could be a real downer for many condo-dwelling young families who thought this could the answer they were looking for. That said, if you’re willing to run the risk of transporting your kids on it in the absence of industry tests, it is definitely possible. While we don’t officially endorse doing so, we mayyyybbbbbeeeee moved some kids around on this thing by having them straddle the rack with their feet in the cargo bags, holding the handles. It was fine. We do officially endorse carrying your adult friends the same way.

The light died after a month, requiring a trip to the shop since dynamo hubs are not an easy fix for your regular household mechanic. I could see this being an issue for a few people with this bike, since constant folding, unfolding and squeezing into constrained spaces (such as car trunks) inevitably results in some tugging on wires. Again, not the fault of the manufacturer, but something to bear in mind as owning this bike will, in general, require you to have a good relationship with a bike shop in case something goes wrong with the higher-tech components such as the light or hydraulic brakes. A hub-powered rear light would also be a nice addition.

I also wish the adjustable handlebars would go one step further and fold to have a swept-back option. This would require a whole new system which as of yet doesn’t exist, but hey, if you can make everything else fold and move, maybe this could be possible?

This bike is the long-awaited solution for people who need (or really, really want) a cargo bike but don’t have the space to store it. It’s also an amazing “community cargo bike” since it’s so easy to ride and adaptable to different rider sizes. The price point is very reasonable for the quality, and you won’t find yourself needing to purchase a variety of unexpected “extras” to get what you need out of it. It’s a great choice for couples who want to share a cargo bike, and anyone who lives in tighter quarters but still wants the benefits of a cargo bike. 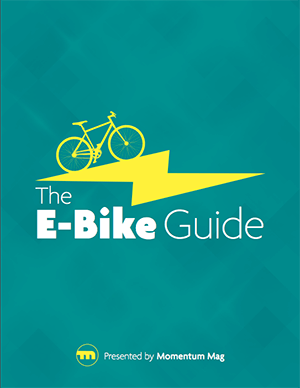 Get your FREE copy of our new guide: Momentum Mag's E-Bike Guide

In this guide we explore some of the different ways an e-bike can provide solutions for different users, outline the different types of e-bikes available, give a briefer on the technological components, and offer some advice on purchasing your own electric bicycle.

Please select your country and provide a valid email address
This is a sponsored guide. Your email address may be shared with Raleigh & IZIP. Please read our Privacy Policy.
Thank you for your submission. Please check your inbox to download the guide!

Bike to Work or Die