How one community is working to counter the negative effects of sprawl. 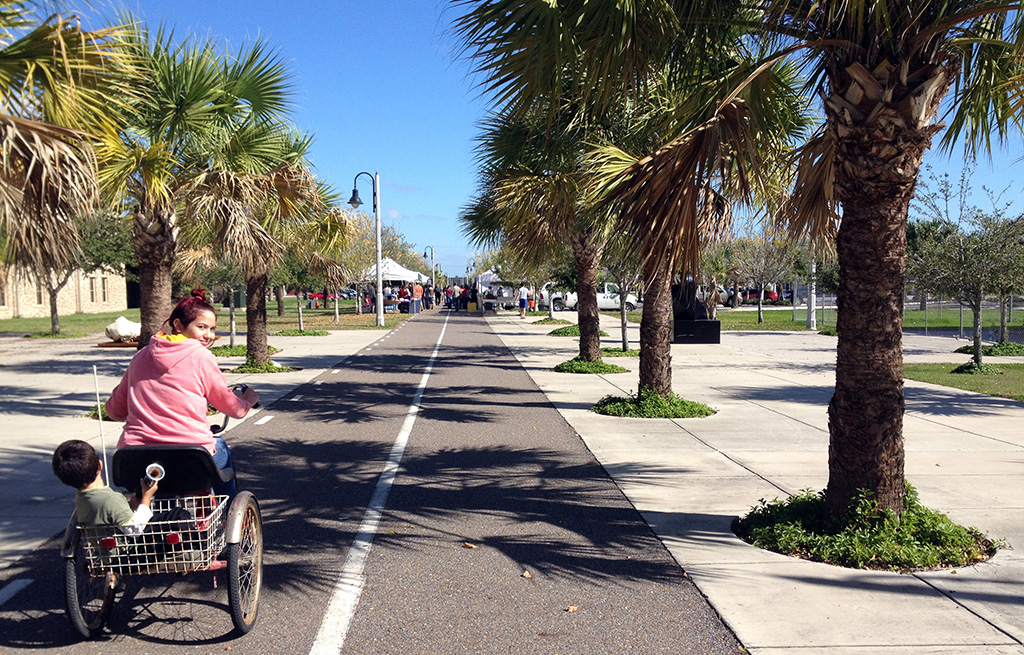 Nikole Gutierrez and Santiago Joyas at the beginning of the Historic Battlefield Trail on their way to the Brownsville Farmer’s Market. Photo by Eva Lizette Garcia.

Communities with the tough challenge of improving the health and well-being of their residents can find inspiration in – until recently an unlikely spot – Brownsville, TX. This historic city is located on the southernmost tip of Texas, bordering Mexico right near the Gulf Coast. On the Northern bank of the Rio Grande, Brownsville embraces the benefits of bicycling and active living. The city’s dynamic, English/ Spanish, multi-year, multi-faceted active living outreach program spreads across the border to its sister city Matamoros, Mexico, and throughout the region.

The challenges facing the population of Brownsville can be linked to years of urban sprawl. It has a population of just over 180,000 and is one of the poorest metro areas in the US with 34 percent of residents living below the poverty level. One in three residents is diagnosed as diabetic and 88 percent identify as overweight or obese. Brownsville residents were in need of change.

Life is now getting noticeably healthier and happier in Brownsville. The results of the City’s efforts to inspire residents to add healthier activities to their daily lives are impressive. For example, bike parking at the university is so maxed out that many students now lock their bikes to any available tree, which wasn’t true a year ago. The Robert Wood Johnson Foundation was so impressed with the City’s progress they awarded Brownsville one of its prestigious Culture of Health grants for $25,000 earlier in 2014. 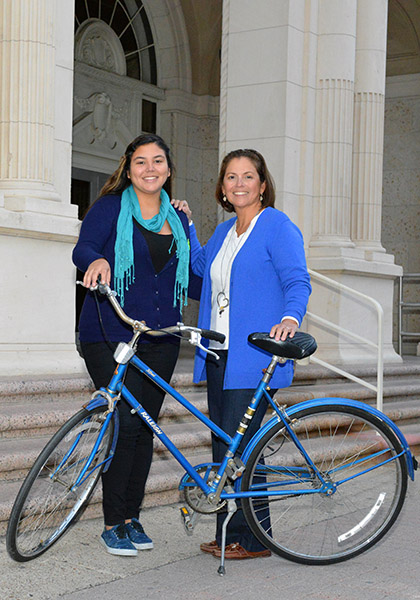 Scratch the surface of any community making noteworthy improvements to the health and well-being of its residents and you will find a group of passionate agents of change working diligently behind the scenes. A notable reason for Brownsville’s success has been the ability of these change agents to engage the local community from a grassroots level up. Two of the key players are Dr. Rose Zavaletta Gowen, City Commissioner and local physician, and Eva Garcia, a City Planner and volunteer manager of the Brownsville Bike Barn, the city’s bike co-op.

When asked to share one of the first times a noticeable shift was taking place, Gowen recalled standing in line for a food tasting at the city’s historic, bi-national, Charro Days festival. She overheard a woman in line say to her friend, “What are you going to get? I’m part of the Brownsville Biggest Loser Challenge and I’m trying to be healthier and be active and I’m not sure what’s the best thing to order!” Attitudes were shifting.

Recalling another change, Gowen remembered one of the first times she rode the city’s new bike/ walk trail and saw a handmade sign posted on a backyard fence along the route that simply stated, “Bike repairs”. A new business was born.

For Garcia, who graduated in December 2013, her first moment of recognition that Brownsville had hit a tipping point occurred when she attended one of the first “Build a Better Block” events in the city’s downtown, an event that served as a prequel to CycloBia.

“The City put in pop-up bike lanes with Agua Fresca stations along the route,” said Garcia. “I remember you could bike and stop to get a drink with your friends. My grandmother was there buying vegetables in the market square, my little cousins were there, everyone I cared about was biking and walking and enjoying being out and active and I realized that this is how it should be every day.”

So how did Brownsville start making changes? Thirteen years ago the spark was lit when the University of Texas (UT) School of Public Health partnered with the City researching residents and their specific health risks. Then, Brownsville gathered together over 200 residents, community groups, and business and health organizations to create a Community Advisory Board. The Board examined the data on the community’s health risks and worked collaboratively with partners to find solutions to help residents become informed and responsible for kickstarting their own health improvements.

In 2008, a team consisting of City staff, the community health clinic Su Clinica Familiar, and the UT School of Public Health launched the Brownsville Farmers Market to promote fresh produce and held it in Linear Park at the trailhead of the Historic Battlefield Trail. At the time, the trail was the only hike and bike trail in the city. Dr. Gowen noted that a shopper arriving by bicycle to the farmers market via the trail is now a commonplace activity.

With a population that is 97 percent Hispanic, including 87 percent speaking Spanish at home, and with some 5,000 bicyclists crossing the border from Mexico into Brownsville every day to shop and work, those working to make Brownsville more biking and walking friendly make sure all outreach materials are bilingual. 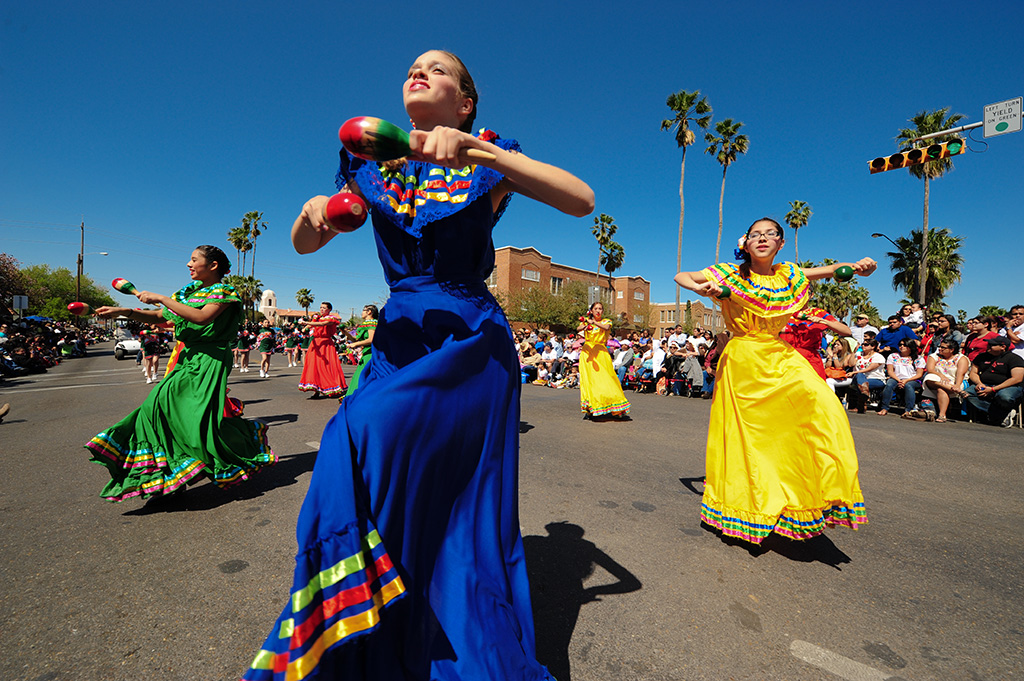 Born to lift community spirits during difficult times, Charro Days Fiest 2015 celebrates its 78th anniversary with the same dedication to bi-national friendship and respect for traditions that first captivated Brownsville long ago. Photo courtesy of Brownsville Convention and Visitor’s Bureau.

Dr. Gowen shared that for all of their events and outreach a basic tenet has been established to make sure everything is accessible to all in the city – ensuring this is a movement for the people and not just some elite, Lycra-clad, bike riding set. After a local television station from their sister city in Matamoros saw one of the UT School of Public Health’s active living public service announcement videos in Spanish, the station committed to playing the videos for free if they would continue producing them.

In 2009, the City of Brownsville began a long-term collaboration with other large employers to create the Imagine Brownsville initiative. Like many US cities over the past 50 plus years, Brownsville had focused on moving car traffic efficiently throughout the city to the detriment of other transportation options. The planning and engineering results were typical and meant the city was neither pedestrian- nor bicycle-friendly with disconnected sidewalk segments and very few bike lanes. The Imagine Brownsville plan determined there was a great need to create a much more walkable and bicycle-friendly city with a sense of place that protects Brownsville’s unique environment. 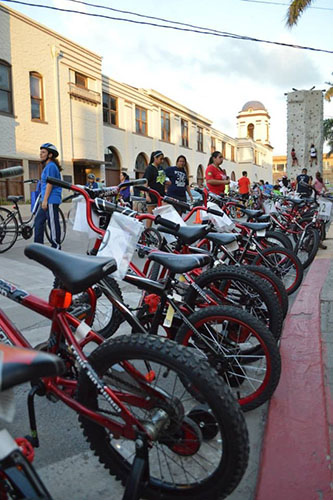 The kids’ bikes from the Brownsville Bikes for Tykes program during CycloBia. Photo by Fernando Martinez.

There are now four active bike clubs including the advocacy-focused Brownsville Bike Brigade, which has gained momentum with college students, young professionals, and new families – especially over the last year. The organization now boasts an impressive 500 members. The Brigade hosts a series of fun, free rides and, as member Edgar Gaucin shared, they are really working on growing their bilingual bike rodeo program for children. Focused on working class families, the rodeos host 25- 30 children, including bikes and helmets so everyone can participate equally. Their goal is not just to help children learn to ride bikes, but for the entire family to see how bikes can fit into the new mindset of active living.

Knowing that city governments can change their focus as new elected officials come in, the Brownsville Bike Brigade is also working with the City to expand the 10-year “Bike and Hike” master plan forward 20 and maybe even 30 years. The goal is to have a complete network of trails around the city for residents to get around easily and safely on foot and by bike. To illustrate the dedication and passion, the Bike Brigade promised the City that if they built the trails the organization would keep them clean. Once a month the Bike Brigade gathers their volunteers together to do just that along the Historical Battlefield Trail. A completed one-mile Belden bike/ walk path expansion of the nine-mile Historic Battlefield Trail tracked 350,000 users from October 2013 to January 2014.

Over a few short years, the number of bike shops in Brownsville has gone from one to four, including the volunteer organized Brownsville Bike Barn with its successful “earn a bike” program.

This year is already off to a running start with improvements in Brownsville. Twelve thousand people attending the city’s 2014 CycloBia open streets events where residents reported a 45 percent increase in physical activity on regular Sundays after attending. “We have now had more ciclovias than any other city in Texas,” said Dr. Gowen. “This year we received recognition as a Playful City and grant money to create CycloBia 2 You, a project to spread the CycloBia route to neighborhoods around town and grow interest and accessibility to the open street.

“We also received a grant from the Methodist Health Ministries to grow a team of trained volunteers to help bring down the cost of open streets events. This grant will also cover bike racks and other ‘activation’ items for schools. With it we will be able to hire a program manager for a year, too!” 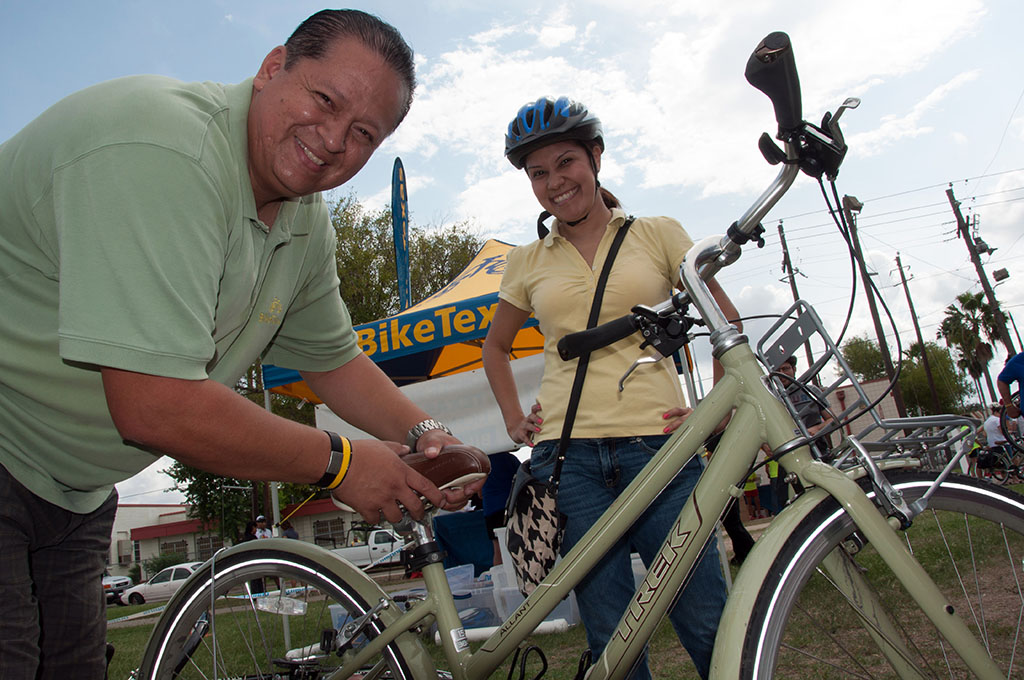 “We are about to finish the first protected bike lane in downtown and a new wide sidewalk was finished in same area,” said Fernando Martinez, Project Manager at BikeTexas. “The first bike corral and repair station was recently installed in Brownsville, the first one south of San Antonio. We are promoting biking at schools too, starting the first Safe Routes to School Program. There’s also a new group called BikeRangers with a mission to use bicycles to promote a good quality of life.”

The benefits are even spreading beyond city limits with a recent grant from the Legacy Foundation to begin creating routes between cities in the county to encourage bicycle tourism.

While change is rarely accomplished overnight, Brownsville and its passionate advocates and residents are demonstrating that recovery from the impact of car-centric, urban sprawl is not only possible, it can yield both economic and social benefits.

Melissa Balmer is a writer, speaker, media specialist, and the Director of Women on Bikes California. pedallove.org

How to Bike to Work