Upright Bikes – Sit Up and Enjoy the Ride

The rider-friendly features of upright bicycles tend to encourage a different style of riding than the recreation-oriented North American norm. 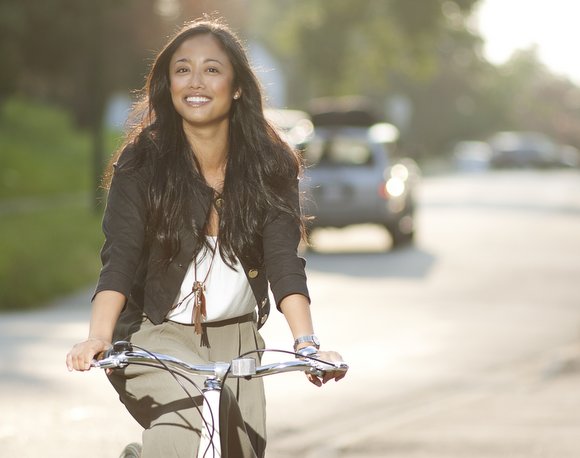 Olga Canlas on the Sillgey Belle. Photo by Trevor Block.

Fifteen years ago, I bought a secondhand sky-blue 1979 Trek, a road bike only slightly younger than me. It was a step into an unfamiliar world of elegant vehicles – until then, my rides had all been cheap, rusty or semibroken.

Pedaling home from the bike shop, stretched over the low-slung handlebars, I noted some things.

“My hands hurt,” I told my companion, a former bike mechanic. “The seat hurts. And my neck hurts.”

“Changing hand positions should help,” he said. “The rest, you have to get used to.”

I kept riding. But the posture the sleek bike required – weight on the hands, crotch against an unforgiving racing seat, back in a range of diagonal angles, neck craning – was rekindling some old injuries.

“Could a person put different handlebars on a bike? To sit up?” I asked.

“You’d have to change out a few other parts,” the ex-mechanic said, “but you could do it.” 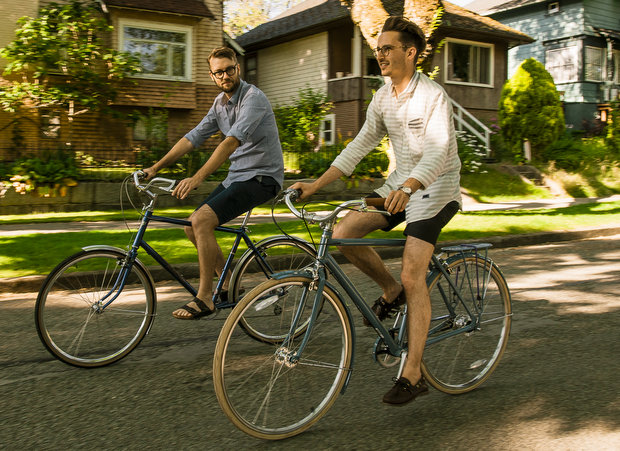 Weeks of size miscalculations and trips to the used-parts bin later, the Trek was set up like a funny, small-boned cruiser. And then I discovered something I didn’t anticipate: I loved getting around on a bike. I wanted to ride every day. The upright riding position dates back to the earliest days of cycling. From the nineteenth century onward, riders could sit up as if in a chair, whether they tooled around on velocipedes, penny-farthings, safety bicycles, roadsters or cruisers. Today – as evidenced by the Flying Pigeon in China, Denmark’s utility bicycles, India’s classic roadsters, or the Netherlands’ “opafiets” and “omafiets” models – the practical, easy-to-ride upright bike remains the two-wheeled standard for much of the world. While their names and styles vary, upright bikes often have additional convenient features like racks, rear-wheel skirt guards, internal gear hubs and chainguards, allowing riders to carry cargo, shift gears reliably and protect their clothes.

Swept-back handlebars are a common denominator of upright bicycles, but additional elements can also help riders achieve a comfortable vertical posture. These frequently include a long, upright stem (the part that attaches the handlebars to the frame); wide, shock-absorbing tires; “relaxed” frame geometry (i.e., long chainstays and less-vertical head tubes and seat tubes); and a shock-absorbent, often sprung saddle.

The rider-friendly features of uprights tend to encourage a different style of riding than the recreation-oriented North American norm. In countries where the bicycle is a broadly accepted means of travel, people frequently ride simply for transportation, wearing everyday clothes. Whether a rider’s destination requires pants or a skirt, flip-flops or heels, shalwar khameez or a suit, the clothes-saving components common on upright roadsters help make owning a separate cycling outfit unnecessary. 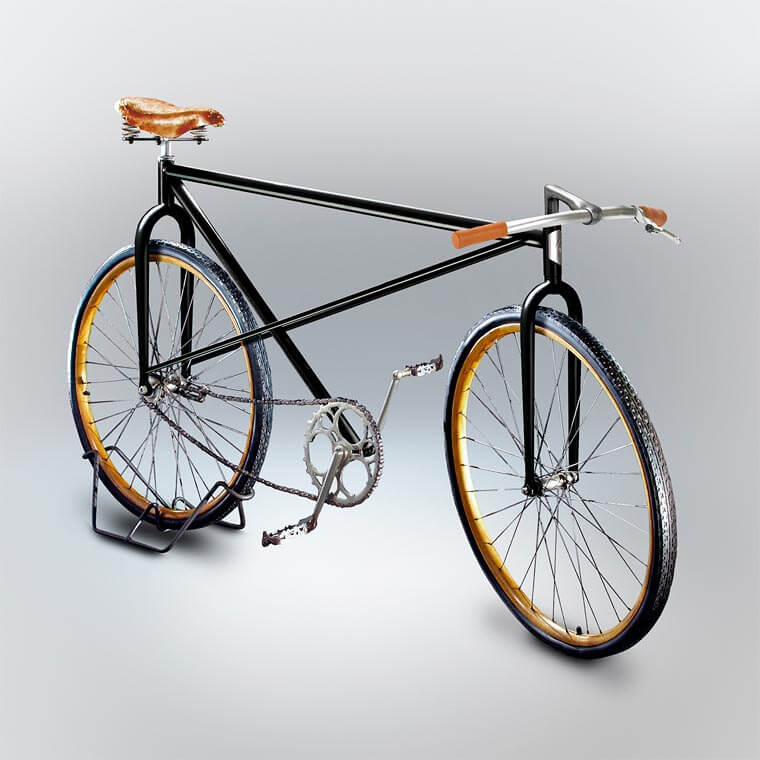 Can You Tell What's Wrong With These Bicycles?

Convenience aside, riders may find some welcome ergonomic relief when they get vertical. Sitting upright on a bike, as sporting goods mega-retailer REI’s website puts it, “reduces strain on your hands, wrists and shoulders.” Physical therapist and bicycle commuter Jutta Schneider concurs: “It’s a very natural position to be in. Low handlebars and a really forward posture can be hard on the neck – and when you add rotation to the mix, it’s especially taxing.” Upright posture, she explained, can also help the lumbar spine, hands and wrists. “So many people we see have these wrist injuries from being in the tech world – you’re seeing so many chronic overuse injuries in wrists. The upright riding position doesn’t load your upper extremities so much, and that’s helpful.” It’s worth noting, however, that verticality doesn’t necessarily confer instant ergonomic benefits. “You can still have bad posture on an upright bike,” Schneider clarified. “You need to maintain a healthy spinal position – that’s always important, no matter what bike you’re on.”

Sport-oriented road and mountain bikes predominate in North American shops – but even a mountain or road bike can be turned into an upright, provided the correct parts are available. Donald Villarreal, the recycling and reuse manager at Seattle’s cycling-advocacy nonprofit Bike Works, fixes and rebuilds used bikes. “I do a lot of our mountain bikes upright,” he said. “Recently, I’ve been building them up with narrow tires and then getting fancy with different kinds of swept-back handlebars.” One of his current rides is a mountain bike retrofitted with ultra-swept-back Nitto Promenade bars. “It’s kind of my mule,” he laughs. “It’s slow, it can carry a lot of weight and it’s comfortable to stay in the saddle and pedal a lot.” 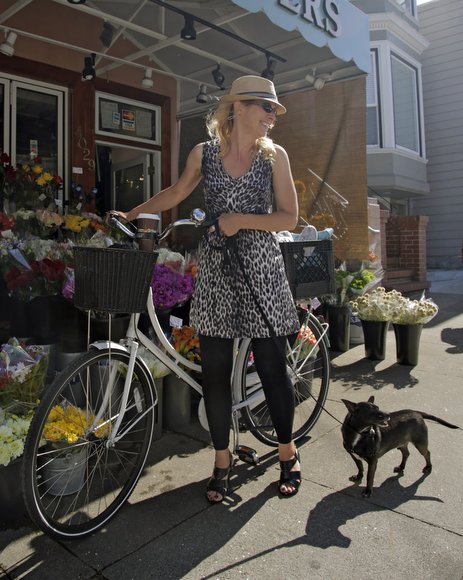 A broad range of people (of varying ages and physical abilities and conditions) have chosen easy-to-ride, low-intensity upright bicycles as a better fit for their daily transportation needs. “I think that sometimes the style isn’t always super accepted – people come in saying, ‘It’s kinda nerdy, but I really like riding upright with swept-back handlebars,’” Villarreal said. “But you’re not nerdy because you want to be comfortable! If you’re not comfortable on your bike, you’re not gonna ride it.” Schneider, for her part, sees uprights as broadly appealing. “I think for a lot of us, riding an easy-to-use, upright bike in regular clothing is just less intimidating. And it’s safer, I think, from the standpoint of traffic-bicyclist interactions,” she observed, pointing out that sitting up makes a rider more visible to drivers, as well as better situated to easily see around.

As the popularity of upright bicycles grows, bike manufacturers are putting more models on the market. Cruisers, upright city bikes, and sometimes even imported Dutch fietsen are becoming more prevalent in shops – along with a wider array of aftermarket parts (swept-back bars and grips, long stems, stem extenders and comfortable seats) for riders who want to upgrade or convert the bikes they already have to make them more suitable for urban biking.

The increased wind resistance riders encounter in the upright position does result in aerodynamic sacrifices. But in a mixed-traffic city environment, where a breakneck pace can contribute to nasty collisions, riders may not mind some slowdown – or even notice much of a difference. “I find myself passing an awful lot of people who are crouched over on racing bikes, trying to get the most out of their spandex,” grinned Tony Dattilo, a college instructor who commutes to work through multiple cities on his upright 1980s Sekai. “And at the end of a long ride, when I’m drinking beer with my biking friends and they’re complaining about their backs, I just smile.”

In an attempt to slow the impacts of an oil-fueled economy, some North American cities are promoting a broad range of non-automotive transportation modes. Many of us are considering the bicycle as a possible option for our daily travel needs – and promoting a comfortable cycling style that requires no special clothing or degree of physical fitness may help get the most people possible onto bikes. In his writings on cycling posture and design, bicycle designer and lecturer Mark Sanders has discussed the “vast blue ocean” of noncyclists, claiming that the cycling industry’s focus on sporty road and mountain bikes (aimed at a comparatively tiny “red ocean” of recreational enthusiasts) has hugely limited cycling as a common form of transportation. We should “look beyond cycling as a sport/ leisure/ hobby activity,” Sanders wrote – and instead encourage the comfortable, ergonomic utilitarian upright. “If the cycle industry is compared to the automotive industry,” he pointed out, “the majority of cars promoted would be sports or racing cars, with little focus on normal family cars. …Forget going green. Forget sport. We need to do what generations of marketeers have done for cars: promote the upright bicycle as sexy, exciting and cool for all.” 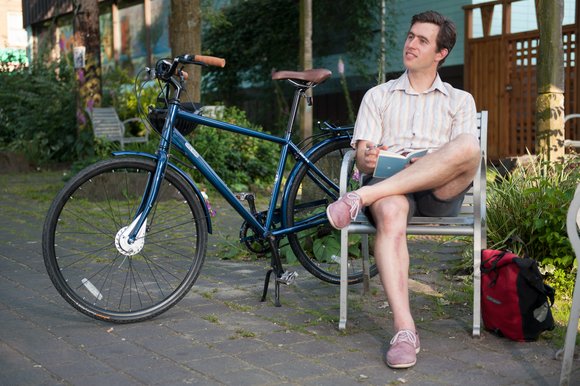 Why Are Road and Mountain Bikes So Common?

Road bikes – loosely defined as performance-oriented bicycles with “drop” handlebars that put riders into a forward stance – swept across North America during the 1970s “bike boom,” when widespread interest in cycling enticed a flood of new bikes onto the market. Many were modeled on the graceful racing designs of the earlier 20th century, and the road bike has enjoyed wide popularity in the US and Canada ever since. They’re appreciated for speed and long-distance riding because their handlebars encourage riding postures that help cut wind resistance – also, the bars’ shape and multiple points of access to the brakes offer multiple hand positions, useful for lengthy rides.

Mountain bikes, meanwhile, are descended from the balloon-tired cruisers that mountain-biking pioneers used for off-roading in the 1970s in Marin County, California. After Specialized introduced its mass-produced “Stumpjumper” to the US market in the early 1980s, the mountain bike gained popularity for general use, eventually dominating North American markets alongside the road bike. Mountain bikes also appealed to on-road recreational bikers with a few welcome comfort-centric features – fat shock-absorbing tires, handlebar-mounted shifting, suspension (in later models), and a more upright riding posture – though in general, the bikes’ elongated top tubes and straight handlebars still tilted their riders forward.

Anne Mathews has been converting abandoned road bikes into uprights since the late 1990s. She lives in Seattle, where she edits books, writes songs and plays music with Orkestar Zirkonium and The Lonely Coast.