An Australian Ad Features a Helmet Photoshopped Onto a Dutch Cyclist

Heaven forbid the children learn about places where you can safely cycle without a helmet. 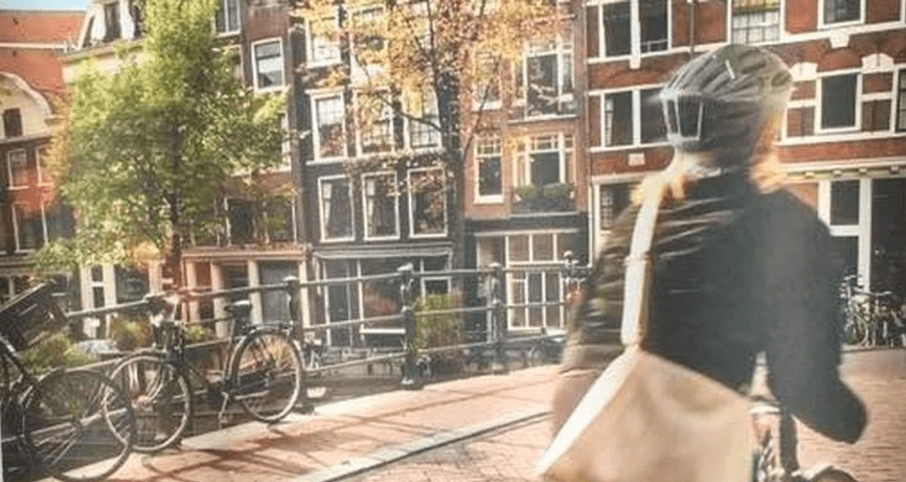 Since the early 1990s, it has been illegal to ride a bike in Australia without a helmet. Apparently it’s also illegal to advertise even the idea of somebody riding a bike without a helmet, no matter where they’re shown to be riding.

A recent Emirates ad at a bus stop in Sydney shows a helmet-wearing woman riding a bicycle along a bridge in Amsterdam, the Netherlands. Twitter user @BicycleAdagio posted a photo of the ad, which features the tagline, “Don’t just visit it, live it. Navigate new paths in Europe.”

Emirates ad on a bus stop in Sydney. Yes, that’s a photoshopped helmet on a cyclist in Amsterdam. pic.twitter.com/tKrJwWtU7p

But for all of its efforts to appeal to those who desire authentic travel experiences, the ad misses the mark in a pretty hilarious fashion. If you’re riding a bicycle wearing a helmet in the Netherlands, then you are almost certainly “just visiting.” For all of the millions of people who ride bicycles every day in the Netherlands, it is almost exclusively tourists who cycle with a helmet – much to the bemusement of local residents.

When the ad surfaced on the internet, it didn’t go unnoticed by the Dutch. An article in Dutch journal Het Parool wrote, according to a Google translation, “If we can believe the bus posters in Australia, we cycle here in Amsterdam well-behaved with a helmet on our heads.”

Alas, the bus posters are not to be believed. The original photo was tracked down by another Twitter user, @MartinWolley, who identified it as a stock photo from Getty Images which decidedly did not feature a helmet.

To be fair, Emirates can’t be blamed for photoshopping a helmet onto a cyclist. People who ride bikes without helmets in Australia are subject to steep – and rigidly enforced – fines which were recently upped to AUD $319. To promote helmet-less cycling would be to promote an activity which is decidedly illegal, and apparently so dangerous that the Australian Advertising Standards Board (ASB) considers it a breach of the health and safety section of the Advertiser Code of Ethics. 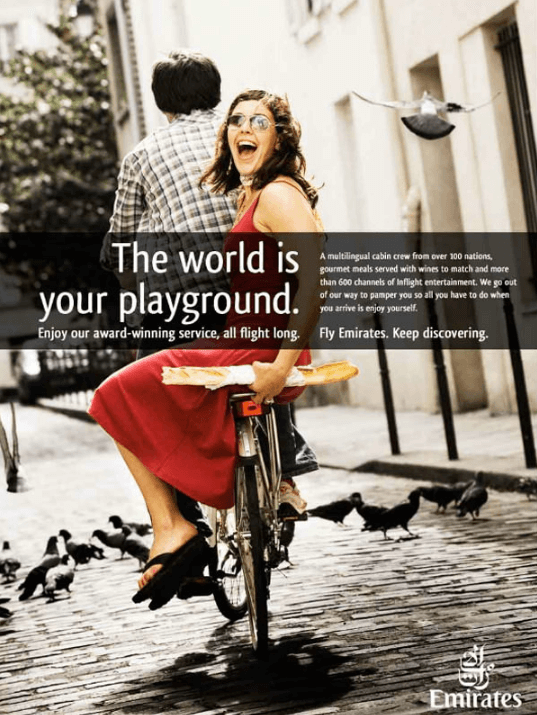 One company to publicly discover this, in fact, was Emirates. In 2008, the airline was taken to task by the ASB for another poster ad which featured a young woman riding sidesaddle on the back rack of a bicycle, laughing, baguette in hand, with neither she nor the rider wearing helmets. One might think that the ad, with its baguette, cobbled streets, and the tagline “The world is your playground,” would have suggested to viewers that it was shot in France where again, riding without a helmet isn’t illegal. But evidently that won’t be sufficient for the kids.

A complaint lodged with the ASB wrote “Although the presence of the baguette suggests the location is France where helmets may not be required, to a younger audience this may not be obvious.” The complaint went on to attest that the ad sends a message to viewers that “reckless behaviour with a total disregard for safety is endorsed by Emirates” and is something which viewers of the advert should aspire to, closing off with “I find this unacceptable.”

Despite a lengthy protestation from Emirates, the ASB still determined the ad to be in breach of the Advertiser Code of Ethics, after it had already been discontinued.

The irony in this situation is plain to see. A resident of a country with a decidedly poor track record for cycling safety is complaining about “total disregard for safety” promoted by the image of happy riders in a country which does an overall better job of keeping people on bikes alive.

But hey, who needs to fuss over details like that?

Given the apparent climate of fear around bicycling in Australia, one can understand why Emirates decide to err on the side of caution with their most recent ad. Although, at the very least, they could have chosen a more fashionable helmet. 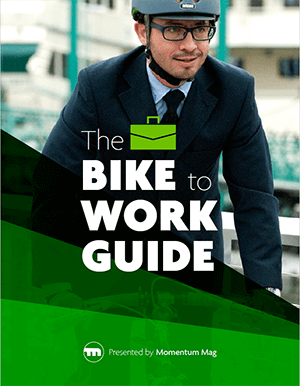 Get your FREE copy of our new guide: Momentum Mag's Bike to Work Guide

Bike commuting is practical, liberating, and a great way to integrate fresh air and exercise into your daily routine. In this guide we outline the major benefits of bike commuting, go over the equipment you’ll want, provide solutions to any concerns, and offer advice on route planning and other practicalities.

Please select your country and provide a valid email address
This is a sponsored guide. Your email address may be shared with Nutcase. Please read our Privacy Policy.
Thank you for your submission. Please check your inbox to download the guide!

How to Safely Pass A Person Riding a Bike

If You Want Your Kids to Do Well in School, Get Them To Bike There