Ljubljana Leading the Way as a European Cycling Capital

Within the borders of Slovenia, a small, heavily forested country, lies an impressive bicycling capital whose influences are spreading rapidly. 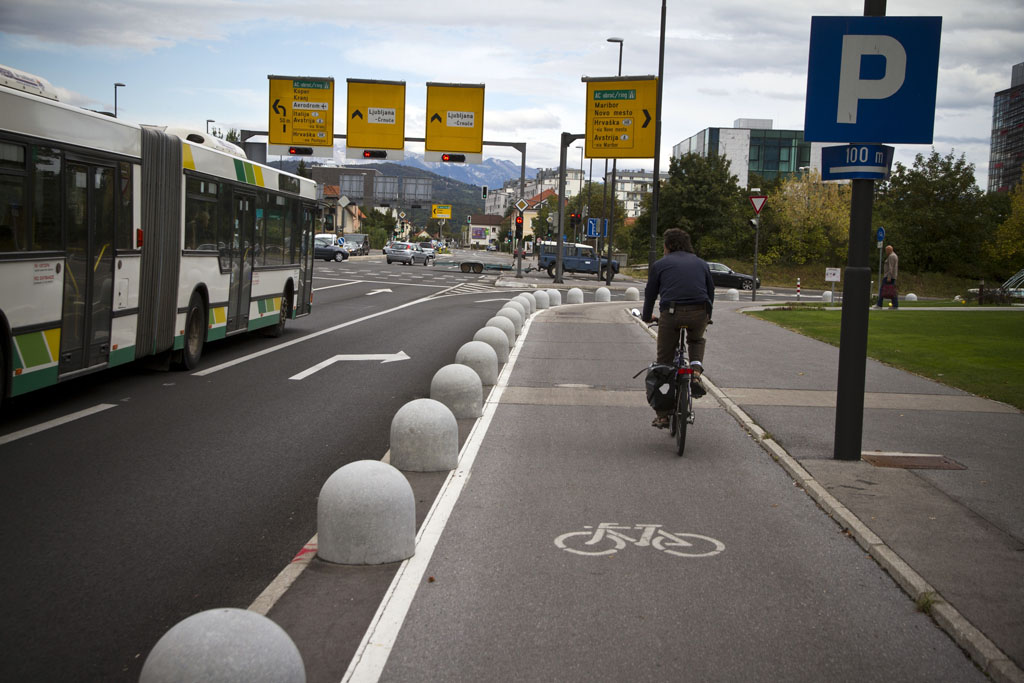 New cycle track in Ljubljana with an added barrier for the cars. Photo by Mikael Colville-Andersen

In Europe, and elsewhere, Slovenia suffers the fate of being confused with Slovakia and the capital city, Ljubljana, strikes fear in the hearts of the tongue-twister challenged. However, it is hard to ignore the country’s efforts to modernize, with a focus on green initiatives, including changing the traffic paradigm and reestablishing the bicycle in its cities as a feasible transportation solution.

Nestled amongst Italy, Croatia, Hungary, and Austria, Slovenia has maintained a unique identity. In this tightly packed neighborhood that has seen national borders shift like Saharan sands for centuries, Slovenia is perhaps the most unassuming resident, a fact that many Slovenes don’t seem to mind.

The country is a small one – smaller than New Jersey. Its capital city Ljubljana is leading a revolutionary charge when it comes to transportation. But this interesting and inspirational story does not have its roots in the past decade with the rise of Bicycle Urbanism. It dates back to the 1960s.

When I was working in Ljubljana in 2011, I was riding with the city’s passionate and tireless bicycle officer, Janez Bertoncelj. We were on a site visit to a new intersection to review some bicycle infrastructure issues. Heading out of the city center, I looked down and realized that we were cycling on a fine example of a Copenhagen-style, curb-separated cycle track. Bertoncelj shrugged and explained that it dated from the 1960s.

I went on to learn that about 50 years ago Ljubljana had started to look at increasing bicycle traffic while keeping cyclists safe. From what I have been able to ascertain, the renowned Slovenian architect Edvard Ravnikar played a role in this cycle track’s development.

Ravnikar led a new generation of Slovenian architects and was inspired by the Scandinavian architectural style. He wrote an article or two about the benefits of bicycle infrastructure, which it seems was instrumental for what happened next. A team of planners and engineers headed to Copenhagen. Despite plummeting cycling rates due to two decades of car-centric planning in the Danish capital, there were still stretches of cycle track to be found. This was at the peak of the Cold War, and though the curtain around Yugoslavia was beaded rather than iron, it is still impressive that such a study trip was made during that era. 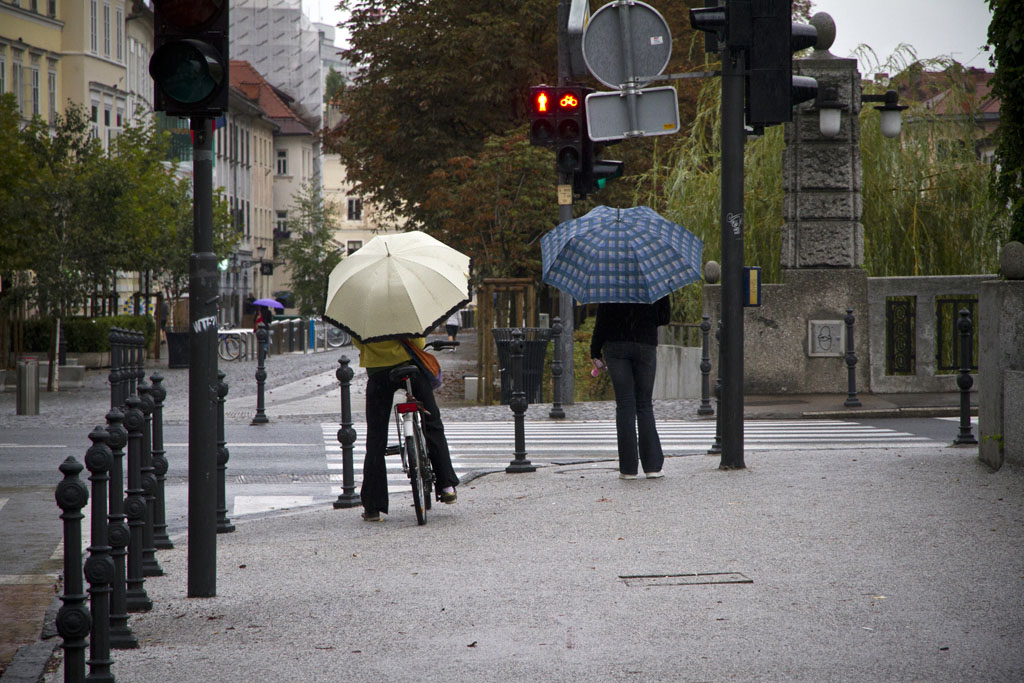 Like in any mainstream bicycling city, cyclists and pedestrians are hard to tell apart. Photo by Mikael Colville-Andersen

After studying Copenhagen’s bicycle infrastructure, the team returned to Ljubljana and got to work implementing 25 miles (40 kilometers) of Copenhagen-quality cycle tracks. Cycling levels rose from 2 percent to 10 percent in a year and remained at that level for the next four decades. 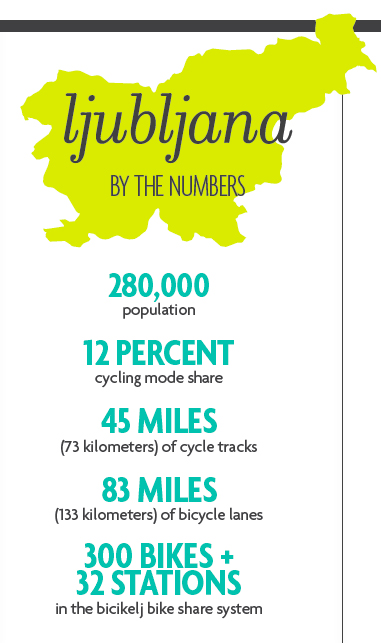 For me, this story is really the foundation for the modern age of Slovenian urbanism.

Like many countries after the fall of communist rule, Slovenia mapped out a personalized fast track to prosperity. Although Slovenia lands on the heavy end of the scale regarding car ownership among European countries, (with one car for every two inhabitants), it is a small country with 66 percent of its territory covered by forests and rural towns sprinkled across the landscape. However, its compact city centers almost presuppose bicycles as the preferred mode and the inroads that Ljubljana has made are now inspiring the country’s smaller cities and towns.

The 280,000 citizens of the capital, like urban dwellers everywhere, have places to go, things to do, and people to see. Electing politicians willing to pass policies, approve infrastructure, and promote intelligent transportation choices is key. The city has a pretty decent base to build on. Indeed, cycling mode share has increased to 12 percent since 2006, largely due to investment in infrastructure and the implementation of a bike share program.

As it stands now, 37 percent walk, 12 percent ride a bicycle, 13 percent use public transportation, and 38 percent drive a car. There are 45 miles (73 kilometers) of cycle tracks and 83 miles (133 kilometers) of bicycle lanes. On a global scale, these numbers are impressive. There are more miles of protected cycle tracks in Ljubljana than in all of Canada.

Not content with the status quo, the current administration is now pushing for more. Getting bicycles back into the traffic equation is all the rage these days, but only some cities will put their money where their mouth is. 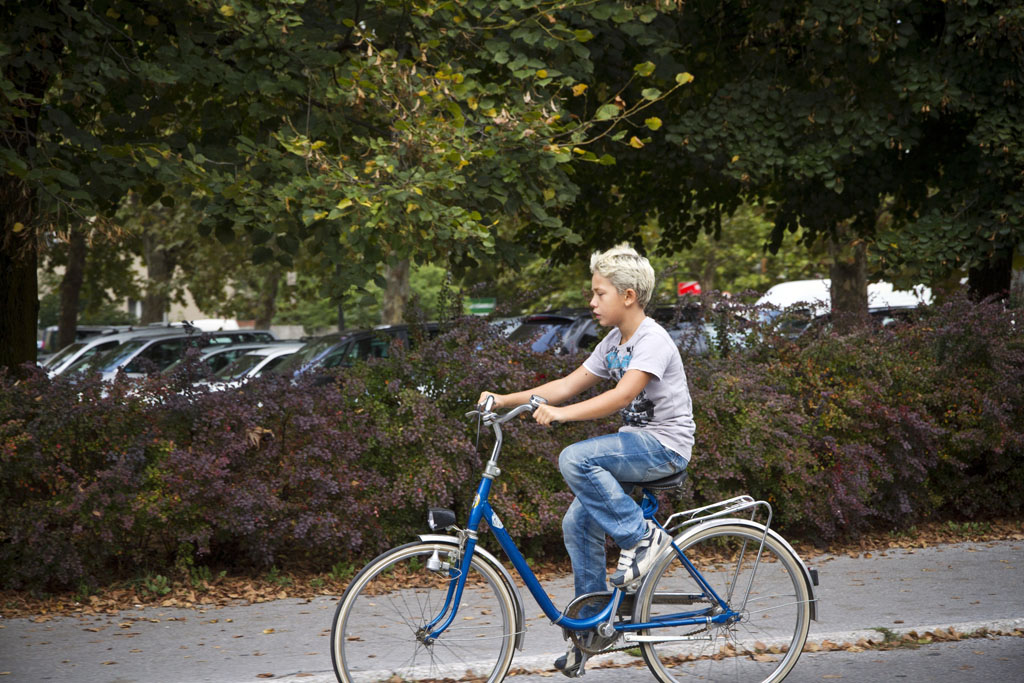 Cycling is transportation for all ages in Ljubljana. Photo by Mikael Colville-Andersen

Building upon the copy/ paste successes of the 1960s has taken a while, but things are accelerating. The city has recently completed work on a new bike path through Tivoli City Park, newly painted bike boxes, and added bike lanes on a number of streets.

A new bike counter on Dunajska Street declares publicly that there are many days with more than 5,000 cyclists who take a trip through there. 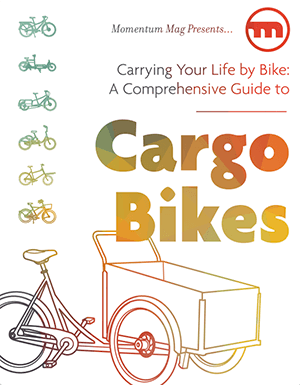 Get your FREE copy of our guide: Momentum Mag's Cargo Bike Guide

Please select your country and provide a valid email address
This is a sponsored guide. Your email address may be shared with Bike Friday. Please read our Privacy Policy.
Thank you for your submission. Please check your inbox to download the guide!

Slovenska Street – in effect the entire nation’s boulevard – is undergoing a massive redesign. For decades, this was a quick, crosstown route for cars and trucks but this is a new century. The street is being redesigned to limit motorized traffic through the middle stretch, in the heart of the city, and to prioritize walking, cycling, and transit. The changes will also open large areas of public space. 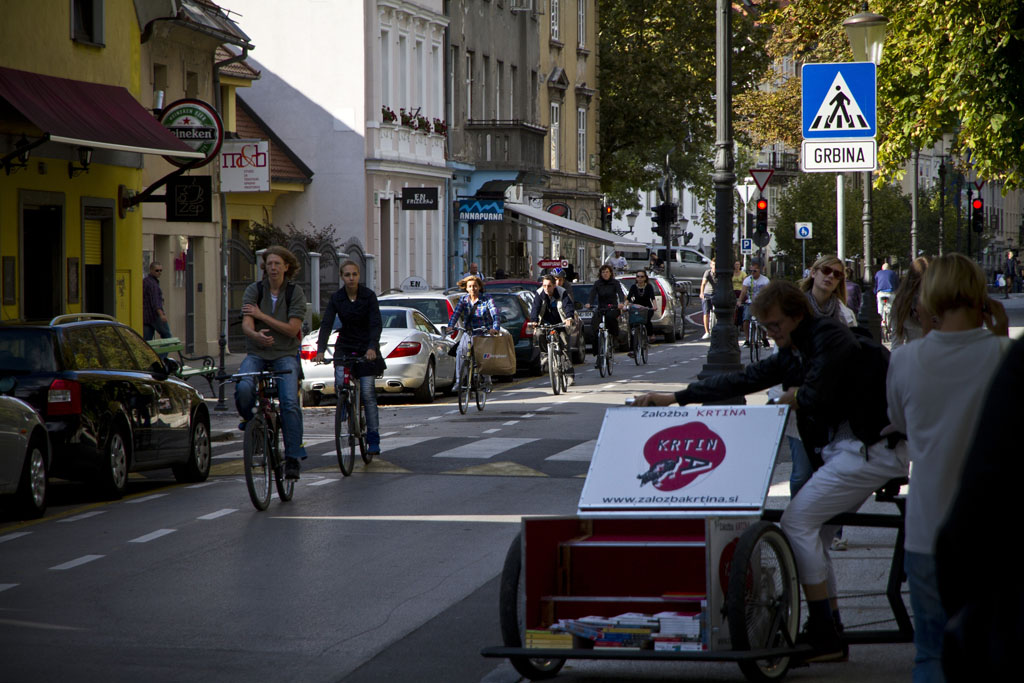 Afternoon traffic on the left, the Library Bike in Ljubljana on the right. Photo by Mikael Colville-Andersen

You can often gauge the mood of a nation or a city by reading their newspapers. The Slovenia Times is an English language publication focused on business. What is their take on the redesign of the capital’s main street?

“The redevelopment will transform the existing motor traffic corridor, which doesn’t contribute to street life, into the capital’s central public area. The withdrawal of motor traffic will enable programmes to expand and design a space with its own character – which will at the same time still partly maintain the historical character of a road that the city centre draws on due to buses, taxis and deliveries.”

“Because of the narrowing to two traffic lanes, there will be extended sidewalks with bicycle lanes on both sides. The two-lane road and pedestrian area will be leveled to visually connect the street area and make it easier for pedestrians to cross.”

“The newly renovated street will acquire a unique identity, modern in every aspect.”

This bold redesign is regarded as modern. It is rare, even in countries that are well ahead of the curve in urbanism, that we read such an angle on a project aimed at reducing car traffic and creating better public space; it’s rather fantastic. 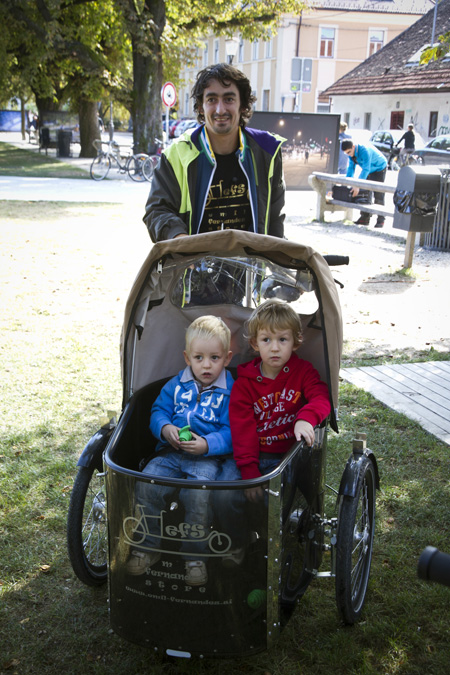 The cargo bike boom is well underway in Ljubljana. Photo by Mikael Colville-Andersen

For a week every September, the European Commission sponsors European Mobility Week – all about sustainable transportation, green initiatives, and making cities better. In 2013, almost 2,000 cities and towns in 47 European countries participated by hosting events and conferences focused on mobility.

Ljubljana received the European Mobility Week Award in 2013. The award goes to the local authority that is best at promoting sustainable transport and introducing new measures to encourage and promote a shift to sustainable transportation forms. The city’s extensive program of activities was connected under the theme of “Clean Air – it’s your move”.

Throughout the week, Ljubljana introduced a new bus route, a bus card for people with disabilities, new environmentally-friendly methane-powered buses, a new cycle track in Tivoli Park, and carried out numerous studies on travel behavior and bicycle use. The programs involved engaging many different stakeholders including schools, sports associations, research centers, and citizen groups.

Thirty-six Slovenian municipalities participated in European Mobility Week in 2013 – a sign that the trickle-down effect from the capital is now a steady flow. The trickle started early. The copy/ paste approach to implementing best practice infrastructure also reached other cities. In the country’s third-largest city, Celje, there are still protected cycle tracks dating from the 1960s – also directly inspired by Copenhagen.

Maribor, the second-largest city in Slovenia (and previous winner of the Alpine Town of the Year Award) is also moving in the right direction. The city opened the country’s first mobility center that focuses on sustainable mobility in January 2014.

As a yardstick for their progress, Ljubljana has been selected as the European Green Capital for 2016. Although, these annual European Union initiatives are not exactly of interest to most citizens, as the Green Capital Ljubljana will follow Hamburg (2011), Vitoria-Gasteiz (2012), Nantes (2013), Copenhagen (2014), and Bristol (2015). For a small city I suppose it is a big deal and is likely to be good for tourism. 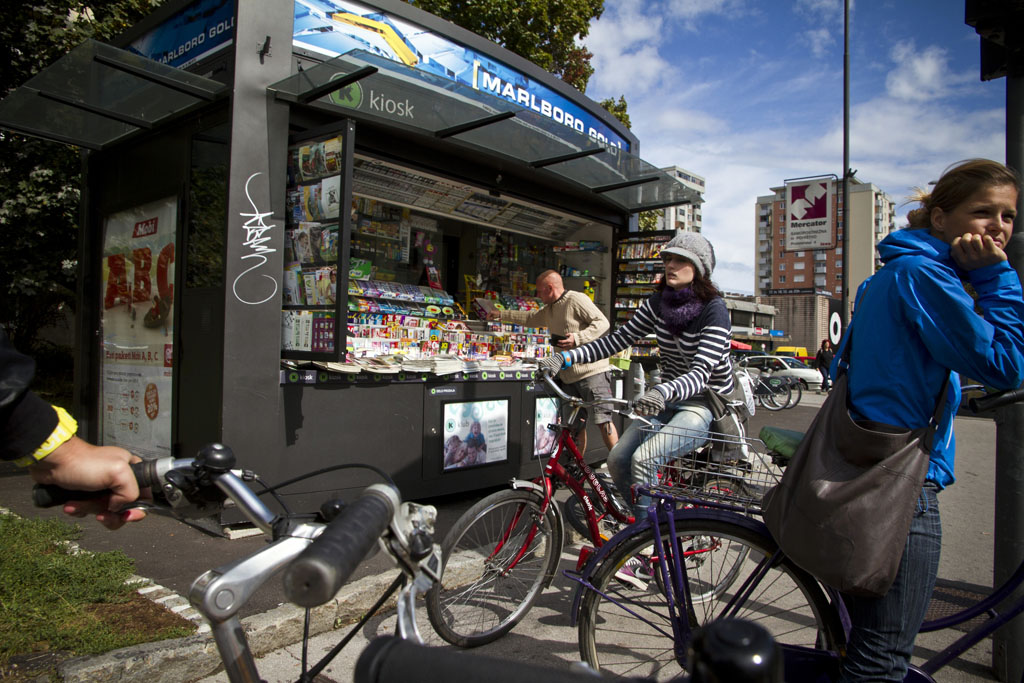 The future looks bright for Slovenian cities and towns. Most countries in Europe have at least one city that “gets it” and boasts higher than average cycling levels. Czech Republic has Pardubice, Italy has Ferrara, Norway has Trondheim, Austria has Graz. In Slovenia, however, it is the capital leading the way – providing a kind of municipal top-down inspiration. It’s always easier that way, especially when compared to the other way around.

In my work, I hear all too often that “this place isn’t Copenhagen” and “all that won’t work here”. In my opinion, Ljubljana has proved a very simple fact: Copy/ pasting well designed, best practice infrastructure gives instant results. In this respect, cities rarely differ. They are just urban landscapes populated by homo sapiens.

One thing that will help accelerate the progress of Slovenian cities would be looking back to the experience they had in the 1960s. I still see infrastructure being put into place that is sub-standard. Reviving the tradition of copy/ pasting best practices and creating an intelligently designed network in cities would provide the ultimate booster for taking urban cycling to the next level, providing all important leadership for cities in the region and beyond. By continuing on the path laid down in the 1960s, Ljubljana will be a name easily recognized – and pronounced – around the world.

Is the Bike Industry Finally Including Women?