How To Bike With Newborns

Advice on bicycling with your baby.

In North America, babies are expected to be kept off a bike until they are at least nine months old and are able to wear a helmet. So why do some parents flout convention?

Online research produces very little information on bicycling with newborns. Angela Koch, advocacy and events coordinator with Revolution Cycles in Arlington, VA, found what little research there was focused on negative assumption and misinformation. Instead of depending on that information, parents have looked to other parts of the world where cycling with small babies is widespread.

When to start bicycling with a baby is a personal judgment. For Carie Weisenbach-Folz, a mother of three from Portland, OR, the time came as soon as she felt physically able. “I was a little nervous with my first child. Our oldest is now six and a half and we started to ride with him when he was about one month old.” Weisenbach-Folz felt more comfortable riding with her third child, starting just weeks after he was born.

Jessica Roberts, a program manager with Alta Planning + Design in Portland, OR, started cycling with her child when he was around five months old, approaching it more cautiously. There is a lot of fear around parenting and this extends to cycling with your newborn. There was a “fear drummed into us [bicycling parents] about vibrations that would damage his nervous system,” Roberts said.

I asked Diana Leung – a research assistant at BC Children’s Hospital in Vancouver, BC – to contact half a dozen researchers specializing in pediatric injuries to inquire about the safety of cycling with newborns. None knew of any literature or hard evidence to support the claim that vibrations from normal bicycle riding would lead to brain damage in a newborn. 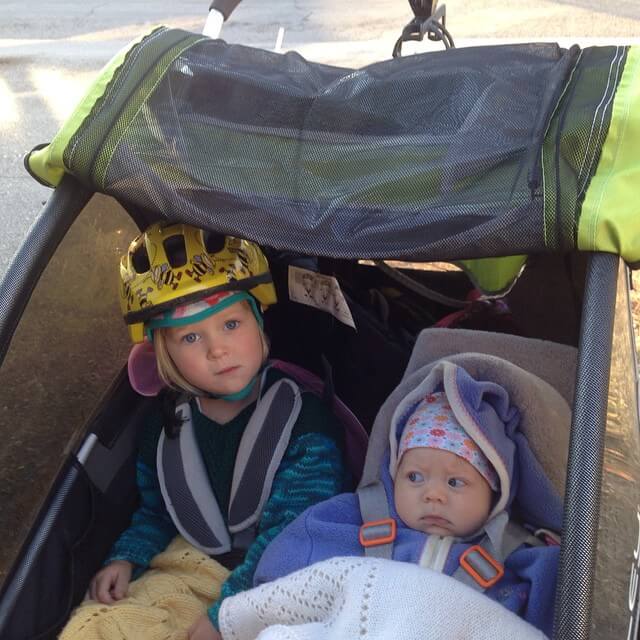 Transporting Kids by Bike: A Journey

Parents are concerned about different risks and threats; many, such as Jasper Lieber in Portland, told me that other road users and collisions with cars were their biggest fears. Others saw no extra risk and no difference between cycling and walking with a stroller.

Todd Litman, founder and executive director of the Victoria Transportation Policy Institute, who started cycling with his oldest son when he was just days old, addressed the risk. He said: “There is no reason why, if a child is able to be carried in a car, they shouldn’t be able to be carried in a bicycle trailer. A lot of people overlook the risks and stresses associated with driving, but make a big deal about bicycling.”

Bicycling with your newborn can be done safely. Some parents I have spoken to choose to cycle with a car seat secured in a bicycle trailer. Weisenbach-Folz said that: “With our first child we had him buckled into a regular car seat that was strapped into a trailer. I was not super worried about safety. We made him as safe as we could.” For their second child they purchased a Bakfiets and secured the car seat to its base.

Living in a city with a decent cycling network helps; so does good route planning. Bicycle boulevards, low traffic streets with good connections and safe intersections are often the primary routes for parents cycling with their newborns. Angela Koch, whose first child was born in Jacksonville, FL – “a cycling nightmare” – was relieved to move to Portland where her two other children were introduced to cycling on some of the city’s comparatively safer streets.

Parents have strong motivations to start riding with their newborns, such as convenience and pleasure. Brett Hondorp, a father from Portland, told me, “With the bike we could just park outside and never have to go into the parking garage. It was the healthiest thing for me and my child.”

All parents interviewed for this article managed the risks they were taking with their children by choosing appropriate carriers and quiet cycling routes. 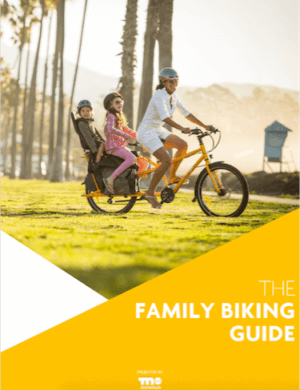 Get your FREE copy of our Family Biking Guide

Family biking is not only a healthy, affordable, and sustainable, but an amazing opportunity for your kids to get to know their environment, and spend quality time with you. We've outlined tips, best practices, and gear ideas for biking with children – from babies through to school age.

Please select your country and provide a valid email address
This is a sponsored guide. Your email address may be shared with Yuba. Please read our Privacy Policy.
Thank you for your submission. Your free guide has been sent to the email address you provided.

Morning to Night with a Folding Bike